From Life is Strange Wiki
Jump to: navigation, search 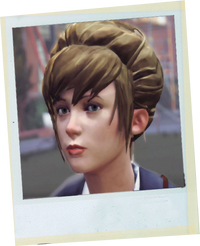 Kate Marsh is/was (depending on choice) a classmate of Max. The other students often make fun of her religiousness, although Kate doesn't attempt to preach or convert anyone. She seems to be involved in a lot of religious groups. Sometime before the events of the LIS, she had very embarassing accident, when she was at Vortex Club's party. Appareantly, someone filmed it, and put it on the web.

In Out of Time

Near the end of the second episode, Max walks into class, only to find out, that Kate is missing. When she sat on the chair, she saw Kate walking towards the tower. Then, suddenly, Zachary comes in, and tells the class, that something is going on on girl's dorm. After that, all of the students run out of the school, only to see Kate standing on the edge of the tower, ready to jump off. After a small break, she jumps, only to Max to rewind time twice. Suddenly, everything stops, and Max, after noticing that everything is non-motion, she goes on top of the tower. First, she tries to stop the time, but, she is being hurt all the time. She then tries to convince her, and depending on player's choices succeed or fails.